Takoda continues to amaze me with both his talent when it comes to using his nose and brain for Search and Rescue and his understanding that he needs to communicate to me when he has found something.

Two days ago, a fellow member of Front Range Rescue Dogs and I took Takoda to the area of a recent SAR mission to see if he would be able to find two gloves she dropped while providing field support for a dog team that day.  We both thought we had the GPS track of the dog handler to go by but when we arrived at the site, we realized neither of us had the track on our GPSs so we searched using a printed map which showed the dog handler’s track.  Without the GPS track to go by, we knew the deck was stacked against us since our accuracy with a map would not be nearly as good as with a GPS but it was a beautiful day for a hike and even though we came up empty handed we were able to narrow down the search area.  Afterwards,  we downloaded our tracks to see how well we did covering the area around the dog handler’s track.  The yellow track is the dog handler. The cyan and purple tracks are from the Friday search.  The pink track is from today’s search.

This morning the map above was the first thing I saw on my computer screen and after reviewing the tracks again, I spontaneously decided to give it another shot, this time having the benefit of the dog handler’s track on my GPS and a smaller search area.   An interesting side note (to me at least) is the southern drift of the pink track occurred when I let Takoda choose the direction of travel on our way back to the car.  I didn’t realize it at the time, but he was headed in a pretty straight line towards the car both times I let him “drive.”  Pretty cool.

Based on Friday’s search, we put the highest POA as the steepest part of the hillside. This area had dense forest with a lot of downed trees, making the gloves unlikely to spot even if we walked close by.   Regardless of the odds against me spotting the gloves,  I took time to look around while walking through that area but my main focus was keeping an eye on Takoda.

(above) The view from the approach to the first glove.  Takoda took a sharp left turn before hopping over this section of downed trees.  He had been heading for an easier route over the trees to the right and I was going to follow him.  His abrupt turn caught my attention and lucky for me I followed him because….. 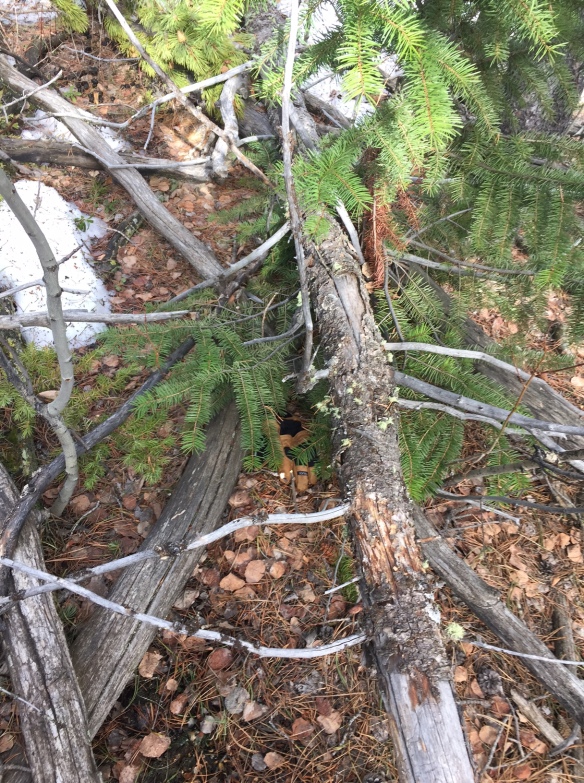 After Takoda hopped over the downed trees, he did an about-face and started trying to crawl under the tree to the left to get to the glove.   I didn’t see the glove at first but he kept trying to reach it with his paws which drew my attention to it.

(above) detail view of the glove.  It was either dragged there by an animal or was wind blown into that crevice.    There is no way I would have found it without Takoda’s help.

I think I was stunned and couldn’t believe he found the glove in that crevice.  After rewarding him, I made my first mistake.  I said FIND ANOTHER and he took off immediately while I stayed with the first glove to take photographs.  URG.  I should have waited to say FIND ANOTHER so I could follow him.  By the time I looked up, he was standing about 75 feet away looking at me while I was packing up my gear.  This is when I made my 2nd mistake. I should have just left my gear, and gone up to where he was standing and come back for my stuff.   Instead I kept packing and he came running back to me before immediately turning around and returning to the same spot up the hillside.  He stood there looking at me again before running back to me again.   It appeared he had found the second glove but then came my 3rd mistake.  I said SHOW ME  and started following him up the hill.  He must have assumed by my different response and cue, that I wanted him to bring me the second glove because that is what he did with great enthusiasm.   At that point, he had run back and forth between the glove and me three times and maintained eye contact while standing over the glove, waiting for me to come up there (I assume) and when I said SHOW ME,  he tried something different.  I rewarded Takoda for finding the second glove and then said something like WHERE WAS IT? at which point he took off and returned to the spot where he found the second glove.   How smart is that?  Pretty smart I think.

(above) the location of second glove

(above) going back to the spot where he found the second glove… which I was able to confirm by dog tracks in the snow.

The gloves.   May they rest in peace.